This proposal aims to create an experimental (3 month) Community Working Group and operating budget to boost community participation and facilitate communication within the Inverse Finance DAO.

Inverse Finance’s community activity is increasing and is adding new members on a daily basis. A few diligent contributors have stepped up, some recently and others for more than one year, mostly on an ad hoc and voluntary basis until the Growth Working Group was formed to enhance our efforts in business development and marketing.

HoIver the Inverse Finance community is in need of its own strategic focus in collaboration with but independent of the GWG. It is widely acknowledged that community is a strategic “moat” for many DAO’s where a great community can sustain even a mediocre product offering, while a great product without the right community behind can suffer from slow adoption or even failure. Inverse today is somewhere in the middle of these two extremes.

As Inverse positions itself to scale to 1 billion in DOLA circulation, the timing is good for a more concentrated effort to build the Inverse Finance community.

I propose the creation of an Inverse Finance Community Working Group (CWG), as an experimental effort which, if successful, can be extended by future DAO vote.

Responsibilities for the CWG would include:

The CWG will be led by @nakamomo who will serve as chair of the CWG. Participants in the CWG will have opportunities to propose new CWG projects and experiments.

I forecast a 90 day budget of 20,000 DOLA as full-time salary for Nakamomo who has been a very active member in several parts of Inverse DAO, officially as Project Manager for the launch of INV+ since December. I also anticipate a modest amount of spending for ad hoc contributors to the CWG for things like research, articles, recording calls and interviews or referral bonuses for those introducing us to new engineering candidates or other valued contributors. I am also anticipating up to 16,300 in DOLA during this period for job advertisements, gaming expenses, and a small amount of INV-branded merchandise to be used for giveaways and incentives that we create through a new Inverse merch store or suitable outlet.

Inverse is ready for a dedicated group devoted to building and strengthening our community as a strategic advantage. I’ve worked with @nakamomo, @akarin, and @99donuts extensively and know they will do their best to make this test a success.

The community has been and will always be our most valuable asset at Inverse. I totally support this proposal since it formalize the commitment and participation of some of our most active contributors.

That would make the salary budget for this proposal $31,500 for the 3 month trial.

The other line items seem reasonable to me, so I would support this proposal with a reduced total allocated to salaries

This budget includes comp for @Akarin who also does a lot of work in GWG as most of you know, as well as @99donuts who is our full time Telegram support/mktg/community lead plus discord mod/support plus he’s active on Twitter and has been paid last 2 months via GWG. I do not believe we should reduce spending here though if we need to fund @Akarin via GWG that may be one way to tighten this CWG budget. Also I have no problem with continuing to fund @99donuts via GWG though to me it’s pretty clear that what he is doing is the heavy community building we really need and CWG would be make more sense but also could be something we do after the 90 day CWG test. Also don’t believe we should ask anyone included in this proposal to take a cut in pay.

After submitting the CWG proposal to Inverse Finance’s forum, we created a survey to gauge the interest and priorities of the IF community. The survey had 10 participants, see the survey results in the slides.

The respondents place high value on both org structure and engaging activities .
In more specific areas of focus, onboarding stood out with 100% hit rate followed by recruiting. Community games and Non-English also had more than one vote each. All options got at least one vote other than Partner AMA’s and Research DAO tooling.

Regarding events, Poker Tournaments are the favorite, closely followed by Partner AMA’s and Twitter Raffles/Spaces. Online games and Decentraland gatherings both got votes but less than half of the others.

The open comment box generated a lot of great comments. The sentiment is clear, the CWG should focus on onboarding and educating new members and also to create an enjoyable working environment.

Six respondents commented that they are interested in participating and assist the CWG to some extent.

A quarter million dollars is too much for community work. Base salaries should be reasonable, happy to talk about KPI-based incentive structures. Will not vote for with the current proposed salaries.

Also, we aren’t talking about GWG work here - that’s a separate issue, ofc you can organize to pay out of GWG budget whatever you’d like to.

After discussions within GWG, I have edited the CWG proposal. I will be working closely with @Akarin and @karm regarding community activities but they will remain in GWG under their current commitments.

The Community Working Group was established a little over a month ago and has successfully carried out several of its tasks.

Starting out, I focused on onboarding as the initial CWG survey prioritized onboarding higher than any other topic. I re-wrote most of the docs to be more beginner friendly and will continue that effort. Both the weekly orientation calls and community calls have been highly appreciated by the participants and have proven to appeal to both retail and institutional visitors. Working group leaders have presented the latest progress, questions are answered and our new developers have been interviewed.

Gaming sessions have had good turnout and proved to be a great social surface for contributors and newcomers to meet in a relaxed setting. With a prize of 50 DOLA in the poker pot (other than the first game), CWG has paid out 300 DOLA to: Edo, Cryptoharry, Nakamomo in order of winnings. Kudos to Ben_Lavabo who won but let his winnings roll over to the next game.

I have been exploring several crypto-native merchandise providers and degen.supply stood out as the most responsive. We received a selection of graphics to pick from and will publish a community vote survey to decide which ones to use.

Me and Karm have been making changes to optimize discord channel layout and permissions structure. Karm has been very responsive as discord admin.

I have kept a continued presence to keep the logo, branding and style guide process going.

At the 4/2 incident, I was present in the war room discussions and joined the other core contributors in our Twitter spaces to assist in the response. Along with banning bots and other moderator duties, I have edited our articles on the topic and helped respond to distressed users in discord and the orientation calls.

We decided to celebrate diamond handed stakers by distributing POAPs representing Inverse Finance entering the curve wars in response to the 4/2 incident to their wallets. Karm did research on POAP distribution, Ishita made a fabulous image and I am coordinating with GWG to time the release.

Going forward
After conversations in the Growth Working Group, we have decided to move the responsibilities of our moderators to the CWG which means that Donuts will receive comp from CWG.

The regular community, orientation calls and poker meetings will continue in line with the CWG mandate.

Voting for merch graphics will be out shortly.

I checked in with all core contributors for feedback on the on-boarding process and to make sure that expectations are aligned throughout the organization. This resulted in a draft document outlining contributor compensation guidelines. I will create a community event, possibly in gather.town unless in Discord, for wider community feedback. I also created a proposal to update their (our) compensation to match the scope of their impact and effort. My comp is moved to the payroll contract and the CWG allowance has been reduced by a corresponding amount.

Gaming
The poker tournaments has a returning crowd but newcomers also find their way there. These sessions have turned out to be the firs vocal interaction for multiple community members who have been contributing without speaking or who have been hesitant to approach us.

Merchandise
Merch designs are underway and I expect the merch to be available before the 25th of June.

General
I overhauled the docs for the Frontier name change and added new yearn assets.

Release of 4/2 Inverse Finance Army Badge NFT finished with 97 claimants so far.
NFT for our entry onto Optimism and Velodrome is up and will be available to claim as DOLA gets bridged to Optimism. Claim it if you stake INV!

Our discord was at times swarmed with bots and me and the mods have done a fair bit of bot banning. Thanks to @karm for fixing our spam protection.

@0xMT suggested that we start a weekly voice call to speak about something that is topical that you found in a book, article, podcast or elsewhere and discuss it. Book Club Tuesdays was launched this week and we welcome the community to join us in the coming weeks.

Other
Nakamomo has also assisted GWG, product and ops:

The Community Working Group led by @Nakamomo has created natural entry points for new visitors and contributors since its inception three months ago. CWG has maintained a cadence of calls throughout the week and now take on the role of Governance Steward to further governance awareness and general liveness within Inverse Finance DAO. Continued funding of CWG is important as community retention makes a critical difference during prolonged market downturns, keeping our valued contributors in-house and fostering an uplifting DAO culture.

The Community Working Group was proposed by Nakamomo and formed on a 3 month experimental basis on Mar 29th, 2022. More detailed updates can be found in previous forum posts but after discussions among core contributors, the original CWG responsibilities have since expanded to:

I propose that we continue to fund the CWG for an additional 180 days, refreshing the budget allowance every 3 months. I will be posting a proposal on Governor Mills to adjust the CWG multisig DOLA allowances to match another 3 months:

Finally, a big thanks to @patb and all core contributors. You are a joy to work with!

Here are the server stats for the 15th March - 13 July. We can see a continuous inflow of new discord members but it is decreasing somewhat. A median of 7.5% of new members spoke in a voice channel which is fairly impressive. We retain around 10% of new members after 2 weeks. Ignore the new member spike on July 4th as our spam protection had an outage.

I think that these numbers are somewhat off because of unrelated bots spamming the server but the numbers seem to be consistent with a living project in the thick of a bear market. 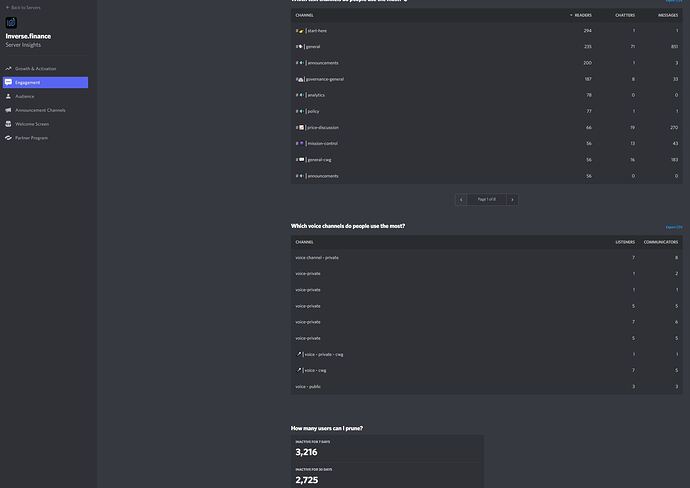 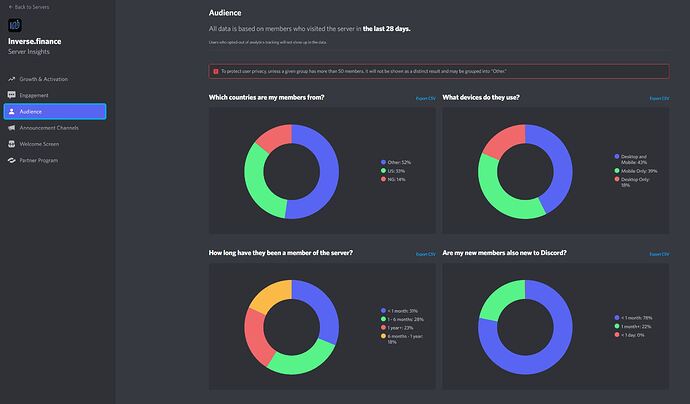