Transition the tokenomics of INV from a simple governance token with optional staking rewards to a positive-sum rewards and revenue sharing token that drives organic demand for DOLA.

Like most stablecoins, Inverse Finance is seeking better ways to grow organic demand for DOLA, increase cross-chain AMM liquidity, as well as finance the expansion of Inverse Finance DAO operations. Inverse’s experiment with Olympus Pro during November is internally seen as successful and worthy of expansion.

Olympus Pro liquidity rewards today are funded via INV taken from the current Inverse Finance treasury, which retains a total of approximately 30,000 INV tokens. Inverse receives swap fees from the SLP tokens it permanently owns and indirectly boosts the generated DOLA interest revenue as a result of the Olympus Pro bonds, but the supply of INV rewards from the treasury will be depleted in the short-term as our liquidity needs expand. A change in the tokenomics of Inverse is therefore contemplated as a way to overcome this INV token supply cliff. 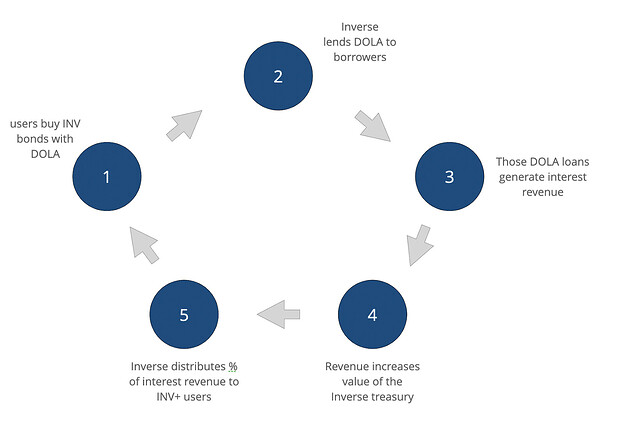 Great proposal, so much hard work has gone into this. Very excited for the future of Inverse.Finance with INV+

where users will take DOLA for first step? If they begin to buy from market, it will pump price for DOLA.

Where is approx numbers of the revenue that you predict the Revenue from DOLA lending? You have numbers how much INV will be diluted (like 10000%), but you have not either one number for the Revenue for INV+ stakers. I think it’s not good, like you watch only to one direction.

Very controversial proposal. there is not a single figure for the cash flow from the interest on the DOLA’s loans.

Great pivot to turn our beautiful worthless governance token into a value accrual asset that pays you to hold it. Great for bull and especially bear markets!

see how Redacted Cartel did. they clearly showed that it is better to give them your CRV / CVX, if you do not have a bag not 7 figures. Since the Redacted Cartel will earn more than yours from them on Curve Wars.

where users will take DOLA for first step? If they begin to buy from market, it will pump price for DOLA.

Users can swap any amount of Dai to DOLA through the Stabilizer if DOLA AMM liquidity is insufficient. Even if demand for DOLA does increase its price over $1, arbitragers will immediate arb the price between the AMMs and the Stabilizer.

Where is approx numbers of the revenue that you predict the Revenue from DOLA lending? You have numbers how much INV will be diluted (like 10000%), but you have not either one number for the Revenue for INV+ stakers. I think it’s not good, like you watch only to one direction.

Assuming 10-20% DOLA borrowing rates, at $1B DOLA in circulation, Inverse DAO can expect between $100-200MM interest revenue per year. Of course, this is based on an assumption. However, it’s worth noting that we did have interest rates go up to 50% APR in some cases in the past. This is in addition to revenue from swap fees generated via protocol-owned LP tokens, the Stabilizer’s 0.4% swap fee and the Stabilizer’s Dai yield farming.

This is a valid concern. Here are a few counter-points:

The core value proposition of INV+ is to offer stakers a positive-sum system that is not reliant on attracting new stakers.

Big appreciate for answers.
I think this is what “i wanted to hear”, I mean I did not know this, until you have written. May be it will be helpful for the future onboarding new people to InverseDAO.

So, this is similar to veIB, I mean, when you stake it, you will receive not only commission from protocol, but your Stake will be increase proportionally new emission…?

nobody likes my posts

Just to make sure I understand what’s new here, is this a fair tldr?

If that’s the case, i’d have a couple of questions:

does the DOLA interest sharing only kick in after the 1bn circulating DOLA target has been reached? That looks a bit too far away and i’d say it’s unlikely to improve demand for INV right away. Could intermediate milestones be implemented?

We have been discussing $500MM as well but the reason for the milestone is to have every DOLA go to DOLA growth as we are too small to begin paying out revenue atm.

are the DOLA interest rewards paid in DOLA, or in INV through buybacks?

DOLA coming from revenue, no buybacks in this proposal but that option remains available.

does this proposal imply the 100k INV max cap can now be increased?

Yes. The intent is to open it in a way which doesn’t hurt long term stakers.

will this require a new or modified xINV contract to be implemented?

No, we will be using the existing xINV infrastructure.

thanks for the reply! this is looking great